Ilaria Bonuccelli of Viareggio, journalist and correspondent with the leading newspaper of Versilia, Il Tirreno, interviewed a handful of people including myself in 2004 for an article about emigrant Bonuccelli in America. The full page article came out in May, 2004; of course it's in Italian, but I've provided an approximate translation below. Italian is a language in which the verb and subject are often swapped, much like the way Yoda talks, so I've tried to make the sentence construction as understandable as possible ;) Of course in order to make an interesting headline they have to make the part about Al Capone as big as possible...Anyway, click on the image of the article to see a full sized JPEG enlargement. 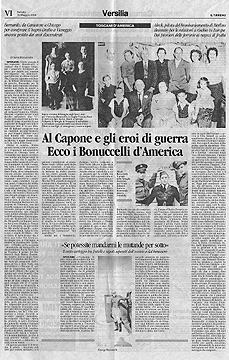 Thanks very much to Ilaria Bonuccelli for taking interest in this story and bringing it to fruition...